This is Shinji Yasuda from NICCOD Jordan Office. Today, I would like to introduce the Counseling Project which has been implemented for Syrian refugees and vulnerable Jordanian people here in Zarqa.

In the Zarqa Support Center, one psychiatrist, two psychologists and one psychosocial counsellor are supporting the Syrian refugees and vulnerable Jordanian people to solve their various mental health problems, as a counseling program. In addition, we are providing those who are living in the areas far from our center or appear to be having potential risks of mental health, with the counseling services with outreach visits.

I joined the outreach visit by the psychosocial counsellor and a Japanese specialist in clinical mental health, supervising the program the other day. It was a usual Middle Eastern rough day, having steady blow of dried dirt and 36 degree Celsius during the daytime.

We paid a visit to three houses in all, and had interviews with the patients of the counseling program. The counseling is, of course, supposed to be carried out in their native language, Arabic language, so the Japanese specialist often translated their talk for me, so as to enable me to comprehend basic information regarding the patients’ backgrounds. 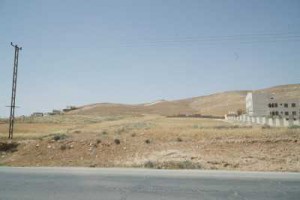 Photo: In the area where we paid a visit

The day after the outreach visit, I asked the psychosocial counsellor and the specialist for their time for sharing me the details about the counseling which they conducted. I was feeling miserable, while listening to their experiences in the Syrian Civil War and current problems; the deaths of parents and spouses, captivity and threat by the Establishment, tough lives as a refugee in an unknown place, poor surroundings, and poverty. As a result of the experiences cited above, the patients have headache, nightmare, sudden screaming, nocturnal enuresis, and it is said that a younger child tends to have more physical symptoms.

After the explanation by the counsellor, I asked her whether she does not get nerves due to the multitude number of counseling with the people with such severe symptoms. She answered as following;

“I understand well that you feel the urge of crying, while facing such people with absolutely severe experiences. I think that is a natural reaction as living beings. However, I make an effort to conceal such emotional feelings from my patients, as a professional counsellor. Essential things for the patients are not getting pity, but recognizing their own mental health problems, and then stepping forward, with believing the light side of their lives. That is because I am facing with the client, while keeping calmness all the time”

Her words reminded me that she was listening to the patients’ talk with sometimes appearing a gentle smile and speaking to them with a calm voice, during her counseling. 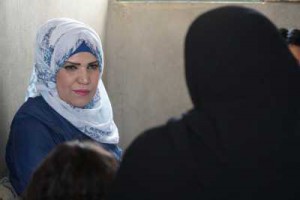 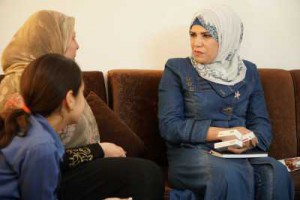 Since the establishment of the Zarqa Support Center for Syrian refugees and vulnerable Jordanian people in 2012, we have provided a total of 5,341 people* with the counseling services. However, many people are still visiting the center every day, due to absolutely serious mental health problems.*As of March 31, 2016

According to the news as of April 28, it was decided that the peace negotiation in Geneva should be intermitted due to the critical situation of the cease-fire agreement. The dozens of civilians were killed in the battle started at the first time in a few weeks.

We will continue to support the Syrian refugees and the vulnerable Jordanian people with mental health problems caused by the war, poverty and so on, from now on too.